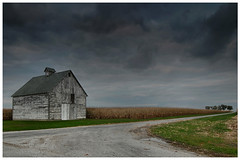 01 Desolation Row
Originally uploaded by Munawar Hafiz
This shot was taken south of Champaign, after taking a random left turn on IL-45.

When I started driving at 5, I was expecting a beautiful sunset. But as soon as I turned westward, I saw a huge patch of black could on the horizon, which would completely block the sun (That it did). Heartbroken, I started driving south looking for some inspiration. Finally, on a desolated crossroad, I came across this haunted house.

I could imagine it coming straight from a psycho thriller: a perfect hideout for a lunatic. I set my equipments while in the car, came out and took the shot, and went back to my sanctuary (in the car) -- all in 5 minutes. Had there been anybody hiding there, it was ample time for him to plan and attack. What a fool I am !!

Note. This is facing eastward, opposing the sun. But as I mentioned, the setting sun was behind a patch of dark clouds, so no action of the sun, adding to the eeriness of the photo.

Note2. The aspect that I love the most about this photo is that it is a great example of dynamic balance: the way the trees in the vanishing point balance the house in the foreground. 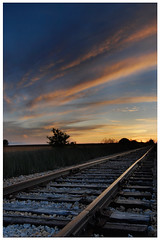 Lightward
Originally uploaded by Munawar Hafiz
It has been a while since I last made a post. From now on, I will often post my photos in this blog, via Flickr, and tell stories about it.

This was taken yesterday about 10 miles west of Champaign. All day, I had been planning to go out shooting during sunset. The sky was overcast with a lot of clouds, and I expected a glorious sunset.

I was not disappointed. However, the next step was to find a suitable place. The flat midwest and its vast cornfields were not appealing. Then I came across this railway crossing, and I got hooked to it right away.

As I was setting up, a car stopped by me. A guy stopped the car and told me that there is a "mean" German Shepherd around, and he is not very appreciative of visitors. I was pretty scared, and quickly got done with the shot.

It was a windy day. Given another opportunity, I would have takes the shot with a higher ISO (perhaps 320) to cut down some of the wind action. The wind action is not visible here, but I would always wonder how the photo would be with a faster shutter speed.

I used my new polarizer to get this shot, but really it was not needed. Instead it was a pain to manage it. Note to self: use equipments only when necessary.
I was fooled to think of Microsoft as the good Samaritan when I read this news,

It is a significant move made by Microsoft because of two "firsts".

The third comment irked my interest, as I initially thought that this is a good-natured act from Microsoft. Further exploration revealed that, indeed this effort is solely to serve Microsoft.

To be fair, this is a perfectly rational thing for Microsoft to do. After all, who would not want to keep their customer base from moving away? The only thing is that I was foolishly considering it as an unselfish act for a few moments. Silly me.

PS. Another interesting comment that Linus makes is that he only looks at code when it has bugs. It would be a fun story to follow if the device driver introduces some bugs. Maybe someone can smell a sinister plot to infest simple and beautiful Linux code with buggy new code...

PS2. The blog is an excerpt from a recent article on the Linux magazine. Here is the url,
http://www.linux-mag.com/cache/7439/1.html

Two years ago, I wrote about the bad design of the Canadian visa form.
http://munawar.livejournal.com/24577.html

They blended two trick questions for which the normal answer is positive, among a long sequence of questions with normally a negative answer. I fell into the trap and answered no for the two 'should have been yes' questions. I had to reapply for the visa. I got the visa eventually.

This year, I am applying again to attend ICSE 2009 to be held in Vancouver next month.
http://www.cs.uoregon.edu/events/icse2009/home/

I was extra cautious this time, lest I make mistakes. But to my surprise, I found that they have changed the visa form. Now, they no more have an entanglement of positive and negative questions.

They decided to change the form after a lot of people made the same mistake. Or maybe its just me initiating the change !!!
I was at Oak Ridge National Laboratory (ORNL) attending a workshop on cyber-security. The workshop was a facade; it was really an opportunity to meet with the funding guys (DoE, NSF, DHS etc) and pamper them so that they remember your name and your work.

A number of these important people went to dinner on Tuesday. I was sitting with program directors from two US national labs, an IEEE fellow and ex-Bell Labs guru, a university professor, and two industry representative. There was one more guy with us: he was the driver of the bus that took everyone from ORNL to the restaurant. As the casual conversation went on, the important people came to know of this fact one after the other. Each had their own way of reacting - some just turned their head and never looked back at the poor guy again, others tried to "dumb down" their conversation but quickly lost interest etc.

One thing was common: they had the shock of their life.
My talk at PACAJOT will start in 20 minutes. Please leave your feedback here. Also it would be great if we have a discussion spawning from my talk.

Thanks for your time.
My ESSoS 2009 talk starts right now. Please leave your feedback here. Also it would be great if we have a discussion spawning from my talk.

Thanks for your time.
United States Director of National Intelligence controls the National Intelligence Council (NIC), the intelligence community's center for midterm and long-term strategic thinking. It publishes periodical reports on global trends mostly read by experts only, but the one released last week got a lot of attention. Titled "Global Trends 2025: A Transformed World", it offers a fresh look at how key global trends might develop over the next 15 years to influence world events. In their own words,

==Quote==
Our report is not meant to be an exercise in prediction or crystal ball-gazing. Mindful that there are many possible "futures," we offer a range of possibilities and potential discontinuities, as a way of opening our minds to developments we might otherwise miss.
==End Quote==

The report got the attention because the media portrayed it as the end of the US dominance. If it is true, what would happen to all the people who come to the US from around the world in search for a better future. It is already a fact that the percentage of people coming from India and China and settling here have dropped considerably because they are now hogging the US jobs and the promise of a better life in their own country. Sure, the social problems exist in China and India, but the affluence will likely improve the situation.

It is a myth, that when a ship is about to sink, rats sense it first and leave the ship. Have the "rats" in the USA already sensed something?
I have just finished watching the movie 'Bow Barracks Forever', a 2004 Bangla film directed by Anjan Dutt. The synopsis goes like this,

==QUOTE==
Bow Barracks Forever is a film about the triumph of the human spirit. It is not easy to fight back the march of progress. Anjan Dutt's film, simple, powerful, almost pleading for hope, captures the real life story of a tiny but resolute Anglo Indian community right in the heart of bustling north Kolkata trying desperately to keep alive its hopes, dreams, aspirations-and its identity, as the world around them changes swiftly and tries to impose that change on them and their lives.
==END QUOTE==

This is just about one of the worst summaries I have ever come across. The beauty of the film is not about the change (it is a 2004 movie, otherwise I could have commented that it is also claiming to portray 'change', an often-used and abused term these days), but about how life goes on and keeps everyone together as the world falls apart around you. You barely notice the outside world portrayed in the movie, instead it stays focused on the hustle and bustle of Bow Barracks and the intricacies in the lives of its motley inhabitants. It is almost a beautiful collage drawn by a painter who concentrates of each part equally, but draws some parts that are more prominent than the others.

Most importantly, the movie is about finding your roots and sticking to it. The Barrack households seem to be dissatisfied with their present, each trying to break free from the shackles in his/her own way. Aunt Emily Lobo, has been calling her son Ken living in London every day for the last four years, asking her son to take her to London but the son never answers the phone or calls back. The loose-character Rosa seeks comfort in an illicit affair, and plans to leave Melville, her husband, with another guy. Anne, tortured by her smuggler husband Tom, plans to elope with Bradley, her boy toy.

The only person that sticks to the Barrack throughout the movie is Peter the Cheater (so masterfully portrayed by Victor Bannerjee). He cheats people by selling old stuff claiming a antique value, or chilling water in the fridge and selling it as wine. He plays a brilliant trumpet. At first, his claims of denying a Mumbai music industry fortune to stay back at the Barracks sound like another lie. But as the movie unfolds, his character grows from strength to strength. And the others around him go full circle, realizing their roots tied to the dilapidated building. In the meantime, people come to the Barracks, people leave, all the time something keeps on happening in the frenzied barracks, but the life never changes, nor does the characters want to change. Only the realization of their roots bring them closer....

Note. I can critique a lot of things of the movie, some of the casting could have been better, the sound mixing is horrible (very surprising for an Anjan Dutt movie, especially since it has a great soundtrack), some of the melodrama could have been shed. But all in all, my impression is that I sat to watch the movie with little expectation, and I ended up with a heavy heart feeling for my roots.
OOPSLA is losing its glamor every year. Last year, the conference organizer's took penny-pinching to a new level. But, what happened on this year's first day would set a new standard.

There is no Internet in the conference center !! Well. there is connection in only in one room, but that is 56K! To have a computer engineering conference without Wi-Fi is unbelievable and unacceptable. Outside that room, you have to buy Wi-Fi access for $10 per day. $10 for 56K is a ridiculous proposition.

I planned to have a live feedback session for my OOPSLA tutorial, but nobody responded. It is reasonable to expect that the attendees would only give feedback when the tutorial is fresh in their mind, i.e. when they are attending the tutorial. But who would pay $10 to do that? So, no feedback for you !!
Collapse